Despite the fact that I have had many thousands of thoughts I’ve wanted to purge over the last several months, the act of committing them to words seemed laborious and pointless. How does one recount the trauma of dealing with contractors without reaching for the bourbon?  How can one convey the irrational urge to punch people in the throat without sounding like you haven’t been taking your meds?  How does one bitch about pain without making it sound like a suicide note?  You don’t.

That said, there were some truly profound shifts in perspective I experienced these past several months.

The first and most significant was that something I thought would make me happy, actually makes me quite unhappy – and arguably crazy.    These things are confusing and exhausting, and they are masters of disguise, initially appearing as humble and sincere, but inevitably metamorphosizing into sociopathic cads deserving of further study by PhD candidates in Psychology.  They are commonly known as “Men I Seem to Attract”.  For a while there, I was attracting a few incompatible men (thanks, internet dating circus), and then, after deleting my account and going it old school, I wasn’t attracting any AT ALL. Imagine the sound of paralyzed crickets, that’s how quiet things got.

Having been single and celibate for more than a year now, I spent the first chunk of that time wondering what was wrong with me, why nobody would chat me up.  I was feeling ugly, fat, old, dorky, unwanted.  Granted, I am all of those things, so that doesn’t help.   But this is where things got interesting: I came to realize that what I mistook for the feeling of being lonely, was, in fact, peace… emotional peace.   That’s when the feeling of misplaced sadness became one of calm and contentment.  I realized that I did NOT like the feeling of being ‘in love’ (or even just being attracted to someone) because my interpretation of being in love has been skewed my entire life.  Anxiety and pining are, like me first thing in the morning,  horrible things.  I don’t like wondering if I’m going to get a call or where things are going.  I hate the excitement of it all.  It’s disruptive and delusional.  It takes control of my senses and makes me a slave to my feelings.  I hate it.  I like this new feeling and, quite frankly, I am afraid of losing this tranquility. 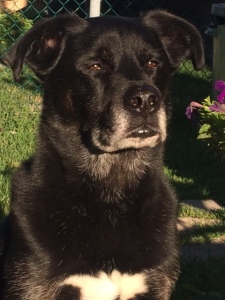 My Jellicle Cat – seriously the cutest, sweetest cat on the planet

It turns out I’m not lonely at all.  Not only do I have three awesome little animals that fill my life with companionship and inspire me to be a better person and hone in on what’s important, but I don’t like being surrounded by too many people.  Everybody bandies about the term ‘introvert’ these days – like the mason jar, it’s just another thing appropriated by hipsters.  But very few of those people can truly relate to the energy-zapping, soul-crushing experience of over-exposure to ‘people’.  That’s not to say that I’m anti-social or hate people – I just prefer to be by myself.  That’s when I feel most at peace.  Having my dog Henry fall asleep with his head on my chest as he’s looking at me is more fulfilling than most encounters I’ve ever had with people.

Could I just be psychologically justifying this so that I don’t feel unworthy of love and attention?  I guess anything is possible; however, I’ve done that before and I was fully aware that I was doing it.  I really wish I was one of those people who was clueless about my motivations, I’d probably sleep better.  But I’m not.  The feeling was completely different when I was lying to myself and others, there was bitterness and resentment.   The feeling I have now is: safe.  I feel emotionally safe and stable.  I yearn no more.  To me, that’s freedom.

The second thing that had a great impact on me this past year was reading The Life Changing Magic of Tidying Up, the sequel, Spark Joy, and the parody, The Life Changing Magic of Not Giving a Fuck.  Now, some of you might be rolling your eyes at the mere thought of the konmari method and how it’s a bunch of hoopla, but I’m here to tell you that the shift from deciding what to throw away, and what to keep because it makes you feel good, was HUGE for me.  The jerk I wasted 9 years of my life with only kept practical things and would rant and rave about how much stuff I had; sometimes, I would throw things out simply to appease him.  But those impractical things were things that made me happy, so I would be left feeling anxious and sad.  I would panic at not knowing what to get rid of, and then get rid of the wrong things.  If he had had it his way, there would have been no trace of ‘me’ in the house.  But that’s another mentally exhausting story that I would rather not get into.  Suffice it to say that when people roll their eyes at battered women for staying in abusive relationships, I do understand them, the psychology behind the dismantling of The Self.   It’s not easy.  It’ll be five years this February since I was ‘liberated’ from that toxic arrangement, but I still have bizarre dreams about him.  Just last night, I had a dream that he stormed my house with a crowd of his cronies  and wanted me to pay for his new girlfriend’s income tax and that he was getting lawyers and would take my dogs away from me.   The subconscious is one fucked up realm, amigos.  But I digress…

I had started the process last summer, but was then sidetracked by water infiltration in my upstairs windows, the terrible decision to have all windows changed, and a non-stop stream of work and expectations thrust upon me.  Not to mention trying to catch a lost Husky, finding a dying blackbird on my front step, and, then there was the pain and general malaise that medications control, yet do not eradicate.  I was depleted.   But psychologically, I was ready for this purge.

Being a somewhat sensitive person, I really like the idea of seeing how an object makes you feel and letting go of those that make you feel ‘heavy’ and keeping those that make you feel happy.   I’ve been notorious for keeping things for sentimental reasons – someone gave or made me something, and throwing that thing away was like rejecting that person. I really did feel sad for the lamp when I saw this commercial:

I started with clothes, as is recommended.  I still kept some ‘meh’ items because they fit, and if I got rid of everything, I’d be wearing a dollarama tarp to the office

I’m not brave enough to post photos of the before and after, so just imagine a bunch of useless clothing being pared down to a semi-manageable amount of clothing, which I will, no doubt have to redo because I don’t think I was fully committed to the process.

Next: books.  That was tough.  I’ve always loved books; a passion I inherited from my father.  My first memory of holding a book was watching my parents read, as I sat in the hallway holding one of my father’s books, mimicking him, pretending to read – I didn’t know it at the time, but the book was upside down.   I still have the last book my father was reading before he died, a spy novel by Len Deighton, with a piece of toilet paper as a bookmark.   Relax people, it was clean.

When I rifled through my books, I had no compunction about getting rid of specific books I purchased because my 9-year-jerk had convinced me that ‘twas not that he was a lying, cheating, sanctimonious piece of shit, but rather that I was insane and needed ‘help’.  At the time, a psychiatrist actually kicked me out of his office because I was wasting his time, so he was pretty much gaslighting me.  I then held my other books, whether read or not, and asked myself how I felt as I held them.  If I didn’t feel comoforted, or excited or any other positive feeling, out it went.  I had asked around if anyone wanted them for book sales, but nobody did.  So, yesterday, FOUR bags of books went to the recycling.  And instead of thinking about it as a waste, I thought about those books as being on a journey to becoming a new book, or copy paper.  Or toilet paper.   I haven’t done the basement, yet, though.   I know you’re supposed to do them all in one shot, in one place… but I just don’t have the energy or sometimes even the strength in my arms to gather all this shit together, so I’ll be doing a modified version of the konmari method.  The main concept is the same: spark joy.

I haven’t started any of the other categories yet, I’ll save that for the new year.  But I did start purging ‘people’ who no longer sparked joy in my life.   NO MAS!  That’s where the book, The Live Changing Magic of Not Giving a Fuck, came in – I initially got it for a laugh, but it’s quite insightful.  I only have so many fucks in my fuck budget and I’m saving them for people and things that matter.  I don’t want drama or duplicity, and I don’t need people pointing out how negative I can be, or that I swear too fucking much, or that I’m being socially unacceptable… all that flattery will just get to my head, and I think humility is my best quality.

Also gone: my facebook account – completely, not just ‘deactivated’.  I had thought about it for a while, but it wasn’t until I saw the episode ‘Nosedive’ on Black Mirror that I thought, yeah, that’s what it’s become, what we’ve become.  That was on Hallowe’en, and I haven’t missed it at all.  I keep in touch with a few people either by gmail or by text, and that’s about it.  Despite the decrease in frequency, the exchanges are deliberate and genuine.   I’m good with that.

The whole purpose of getting myself organized and getting rid of ‘things’ is so that I can have the energy to devote myself to what brings me joy.  I don’t want to waste time organizing or cleaning or whatever; I want to focus on my dogs and cat and being as present as I can be with them, because I don’t know how much longer I’ll be lucky enough to have their loving souls in my life.   I want to free up space in my head to write utter bullshit and start drawing again – do creative things. Essentially, I want to be able to escape… and the only way to do that is to remove the physical things that remind me of life outside my inner sanctum, where unhappiness and bullshit are ubiquitous….