After many years of saying I should make costumes for the quadrupeeps, I finally did.  At least for one of them. 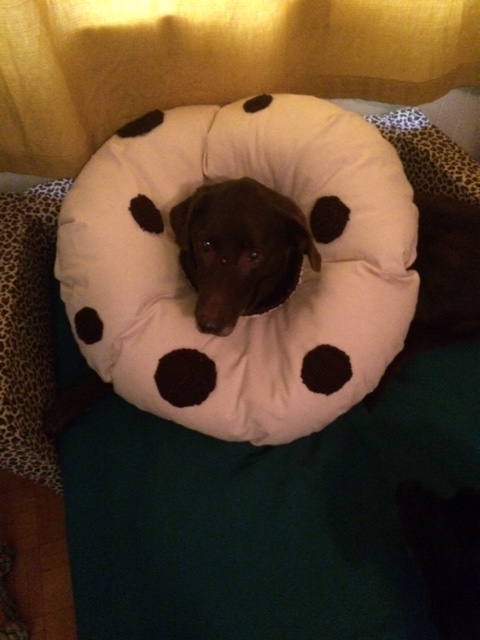 The chocolate chips are crocheted and sewn on.

Since Sasha was a pup, I thought about how cute it’d be to make her a Hershey bar costume.  A Chocolate Lab as a chocolate bar – how perfect is that?!?!  I kept putting if off.  But her recent health issues reminded me of her impending mortality (more on that in a future post), and that spurred me to action.  Except that the fabric store downtown closed (*groan*), so I’d have to haul ass to a really lame part of town to get some silver fabric to make the foil wrapper.  You can’t do a dog costume half-assed.  Therefore,  I had to use what I had at hand.  Next idea:  a chocolate chip cookie.  With her gorgeous little head as one of the chocolate chips!

Naturally, I had no intention of parading her around town like that – I’m silly, but I’m not retarded.  Besides, the last thing I want is for strangers to stop and talk to me after yet another day spent explaining shit to people that they’ll forget tomorrow and have to come back to me about next week.  And, it turns out, quality canvas and pillow stuffing can end up being rather heavy for an elderly dog to cart about…. 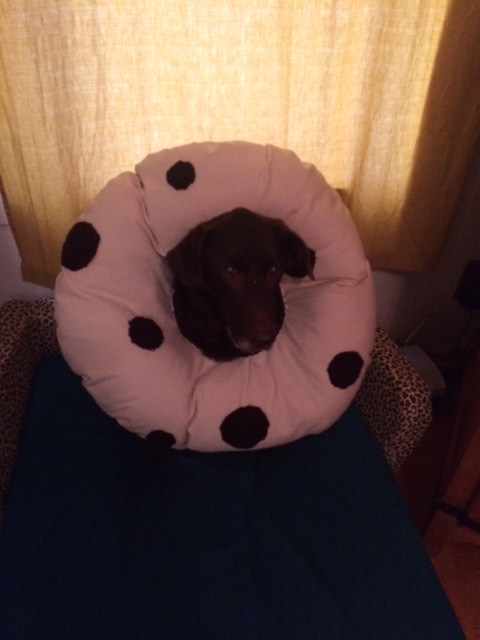 I’m pretty sure she’d pee on my pillow in retaliation, if she could jump up on the bed…

The good thing about this rather large and cumbersome ‘costume’ is that it can double as a pillow for the dogs’ heads, or as a snuggler for the cat. It’s kind of a win-win.

And what did I dress up as today?  I’m glad you asked.  I dressed up as someone who loves her fucking job so much that she wants to die at her desk at 90 instead of winning the lottery and moving into a lighthouse near the ocean – any ocean.  That’s a costume that required a fucking load of effort today, amigos.

So tonight, it’s sangria and the fear of tomorrow… and, for entertainment, What We Do in the Shadows or Young Frankenstein….

This entry was posted in Uncategorized and tagged costumes, dogs, Hallowe'en. Bookmark the permalink.