A Corona, a Conversation, and a Crutch Called Querido…

As I sat knocking back a gorgeous Corona with my equally gorgeous friend ‘CeCe’ the other day, the conversation inevitably turned to men.  Girls + Beer = convos about boys.  CeCe is an absolutely stunning, extremely smart, and confident 28 year old woman who’s happily attached to a wonderful man who makes her happy.  With the exception of one rotten apple, her ex-boyfriends were mostly great guys.  Mine, on the other hand, suffered from something called ‘rapid rot’ – that’s when things start off fresh and hopeful, but quickly decompose into a putrid stench.

As I shared some of my boy stories, I could feel my posture begin to slump back a little more with each tale until, eventually, I may as well have been hugging my knees.  I think I disappointed her with how pathetic I am with men.  You know that feeling you sometimes have when you learn something about someone and you think, “huh…I thought you were better than that…”?  Yeah.  That. 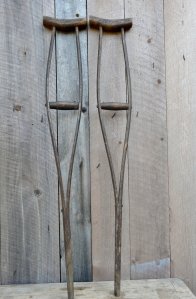 Needless to say, the conversation veered to Querido, who I’ll discuss in more entertaining detail in my upcoming series of pathetic posts called, “Dating Disasters & Disappointments”.  As I briefly mentioned in my post on drinking, he’s the one I’d sangria-text and shamelessly proposition for some sort of sexual arrangement.  *sigh*  Anyway, it was during this convo with CeCe that I realized that Querido is my emotional crutch. He’s safe because I never see him, and he can never hurt me  – because there is nothing there.  If anyone is hurting me, it’s me.  In keeping… nay, treasuring… this unhealthy attachment to Querido, I am protecting myself from the very concrete probability of being damaged, yet again, by someone who is real, tangible.  The truth is, while this attachment is authentic in my mind, it is just that – in my mind.

One of the most beautiful quotes I’ve ever read was penned by Elizabeth Barrett Browning:

I don’t know who he is, nor do I know what he has made of himself.  But he brought out such an incredible burst of creative energy in me, so yes, I suppose I do feel something akin to love for him – for that part of me that he brought out.   A deep affection, if you will, for helping me see a part of myself that was hidden under heavy layers of garbage.  And I like this part of myself.

He’s  been very sweet and patient with me.  He understood that he was my ‘safe’ guy.  I’ve shared some bizarre thoughts and somewhat inappropriate things with him – and he never judged.   He could easily have told me to fuck off, but didn’t.  He let me bleed when others tried to stitch me up, to “fix” me.  Yes… the woman who wins Querido’s heart will be very lucky, I think.

Living life safely guarantees that you’ll never be hurt by another- but it also guarantees that you’ll never be loved by another, either.  It’s scary to put yourself out there because you open yourself up to being judged, to being rejected, to being incredibly hurt.  But there’s also a slight excitement stirring in me as I type – maybe it’s just because it’s springtime, or  the extra coffee I had today, or maybe, just maybe, it’s because I’m feeling just a wee bit more hopeful that there’s someone out there who’ll give me not what I want, but what I need.  That, somewhere, there is someone maybe just as fucked up, maybe just as intense, maybe just as worthy as I am.

So, ladies and gentleman,  it’s time to throw myself back into the piranha tank of dating and see if I get a nibble or two.  Let the games (aka: disastrous and disappointing dates) begin!

Song that fits my current mood:

I don’t get the warning about the nudity for this video – what’s the big deal?  Two women rolling around, naked on a beach, and then having a knife fight… isn’t that what happens on black and white beaches?  (But, seriously, don’t watch this video if you have epilepsy – the flashing can trigger a seizure.)

One response to “A Corona, a Conversation, and a Crutch Called Querido…”